If you feel like the activities and experiences you want to take on in your senior years are limited by previous injury or illness, weakness in your muscles, achy joints, or general physical decline, ​restorative therapy and wellness​ could be your answer. ​

The Goal of Restorative Services is to: improve or maintain the resident's ability to carry out activities of daily living; with emphasis on achieving & maintaining the highest level of self-care and independence.

We craft a restorative services plan that meets you where you are, and helps you maintain your level of function. 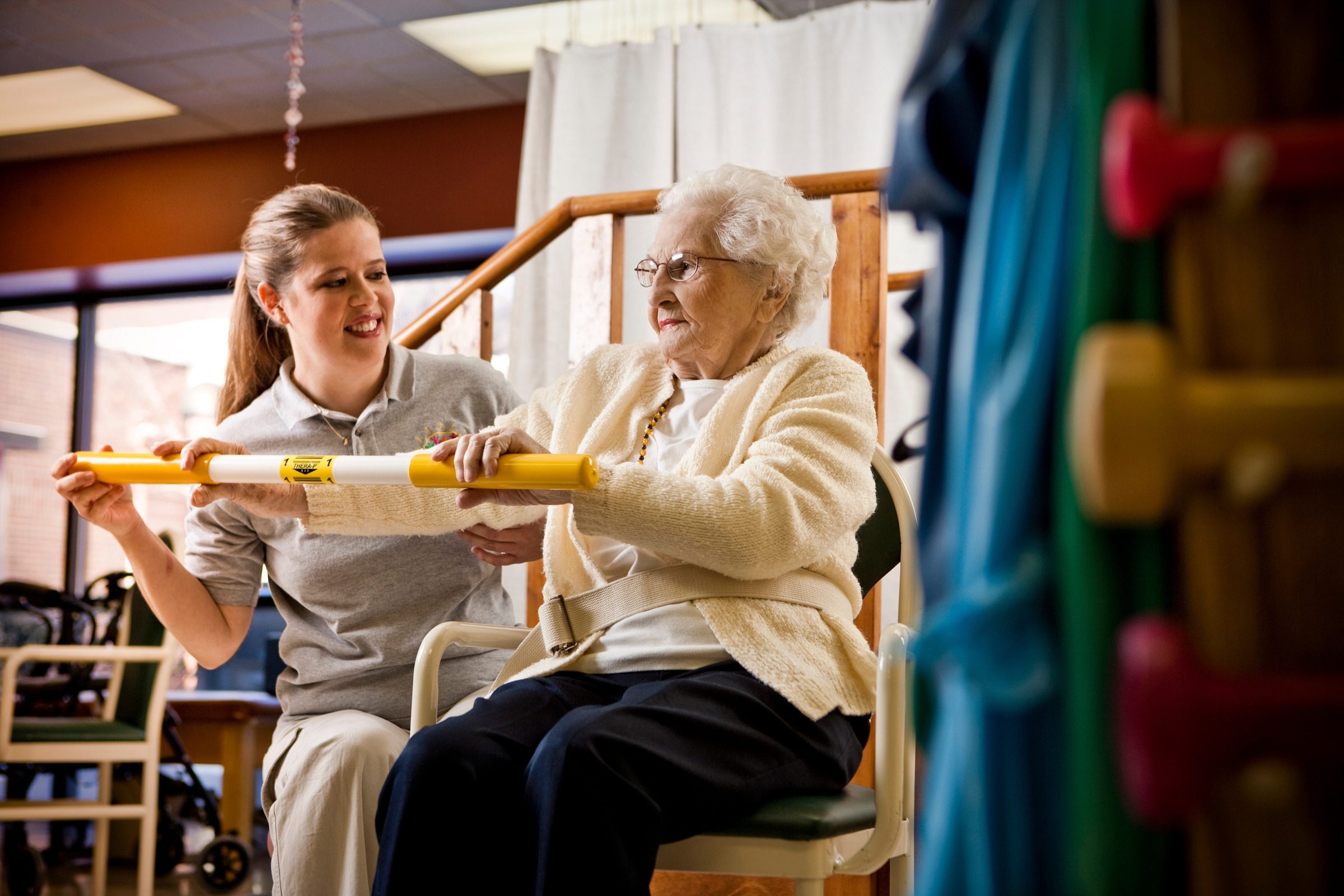 What Is Physical Therapy?

Physical therapy uses a combination of exercises designed to increase the body’s functioning. This includes helping patients improve how they do basic activities such as standing, walking, and lifting. The goal is to build up strength, flexibility, range of motion, and stamina so that completing daily tasks without help becomes easier.

What Conditions Can Physical Therapy Help With?

Although the individual patient’s doctor is the best person to assess the benefits of physical therapy, the practice has been known to help conditions such as:

As we mentioned, physical therapy is a combination of exercises, and is rarely limited to only one type of exercise. Here are a few different styles that are often used:

These different types of physical therapy have many applications to a range of real-life health scenarios. With stroke patients, for instance, constraint-induced movement therapy is often used. This is when a patient is required to use the weaker side of their body to accomplish tasks. The “good” or unaffected side is restrained in order to prevent the patient from automatically using or favoring that side. With victims of Parkinson’s disease, patients perform exercises to improve trunk flexibility. This helps avoid the stiff trunk that is one of the hallmarks of the condition.

Other kinds of physical therapy include electrical stimulation1 and ultrasounds. Regardless of the modality used, a good physical therapist makes sure their patients know how to perform rehearsed tasks safely at home. The patient is educated about ways to prevent injury, maintain their present functioning, and perform any home exercises assigned to them.

Occupational therapy is often key in helping older adults complete “Activities of Daily Living,” or ADL’s. These are essential tasks such as dressing, bathing, toileting, grooming, walking, and transferring. Without the ability to complete these tasks independently, the patient is at risk for permanent facility placement (though this can be avoided with the use of a home health aide).

In addition to maintaining a patient’s ability to complete ADL’s, occupational therapy can encourage autonomy in other ways. One condition where this therapy can be invaluable is dementia2. In addition to issues with self-care, dementia can impact memory and communication. Occupational therapy can teach patients and their families how to simplify activities (including communicating) so they’re in line with the patient’s current functional level.

Another area in which you can employ those with occupational therapy backgrounds and knowledge is home safety consults. During a consult, a professional can advise you and your loved one on ways to make their home safer and easier to traverse, as well as recommend adaptive changes (such as grab bars in the shower).

When one hears the phrase “speech therapy,” it can seem a little odd at first. After all, don’t most of us know how to speak? And isn’t “therapy” when we lie on a couch and tell a psychiatrist about our problems? Well, yes and no. Therapy is simply a way of treating diseases or conditions – in this case, conditions that affect a person’s ability to communicate, eat, and even swallow. Read on to learn more about speech therapy for seniors and why it’s so important.

What Can Speech Therapy Help With?

If your loved one has had a stroke, you may already have heard the term “aphasia” bandied about. Aphasia is a communication disorder1 in which patients have trouble finding the right word for their thoughts, or their speech is halting or unclear. Speech therapy works to help patients concentrate in order to find the right word, as well as respond to verbal and vocal cues. The goal of the therapy is to have the patient reach the maximum possible functioning, although this may not be the same level that they enjoyed before their stroke. Six months to a year is the general timeframe for seeing improvement with aphasia, if improvement is to be had.

Another side effect of strokes is the condition known as “apraxia.” Symptoms include using words out of order or even having trouble moving their lips correctly to form the words. Treatment can involve asking the patient to repeat certain sounds, and then try to make these sounds into words. In addition, the patient may have to speak more slowly, at least at first, in order to make the words, or say them in the correct order.

Older adults often have problems swallowing for a number of reasons. Some of these include strokes, bouts of pneumonia, or changes in their teeth, gums, and the shape of their mouths. Others involve the lack of saliva, either because of the aging process itself or because the person is taking medications that have “dry mouth” as a side effect. Regardless, the lack of ability to swallow is a serious concern, especially for older adults, who otherwise may not receive crucial nutrients2. It is this concern that speech therapy attempts to rectify by treating dysphagia, or the inability swallow easily. A speech therapist may recommend special positions for eating, certain foods, or modified utensils to combat this problem.

Another issue that older adults are prone to dealing with is dysarthria, a motor speech disorder with five different types. It is commonly seen in those with diseases that affect the nervous system, such as Parkinson’s, because of weakness or paralysis that are typical of the condition. Symptoms include a slow rate of speech, or speech that sounds mumbled, slurred, or hard to understand. In these cases, a speech therapist will often monitor the patient’s muscle and breathing patterns, as well as have them repeat certain sounds. In this way, they learn the best method for helping the patient. Treatment techniques often involve having the patient work on tongue and lip movement, breathing technique, and speaking more slowly to have time to form words.

Finally, dementia is a condition that most people don’t realize can benefit from speech therapy. In these cases, therapists help patients retain their communication abilities for as long as possible. Therapists can also help the friends, family, and caregivers of the patient communicate better with them. Techniques involve teaching loved ones to rely more on visual cues, simple words, familiar sounds, and the like.

Learn more about common terminology at the MANOR LINGO CENTER

COVID-19 Update: The Manor is currently in Outbreak Mode. Review more about what this means for visitors here: